Amber Cantorna: Journey from Focus on the Family to ‘Refocusing My Family’ 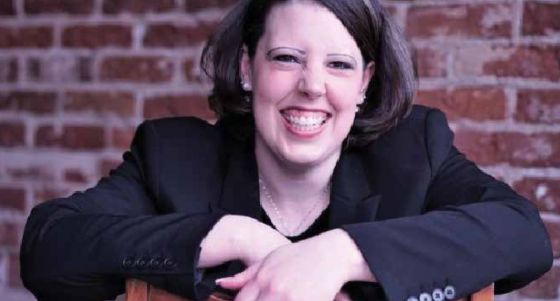 In her authentically jarring memoir “Refocusing My Family: Coming Out, Being Cast Out, and Discovering the True Love of God,” author and activist Amber Cantorna rips the mask off the anti-LGBTQ evangelical ministry Focus on the Family—and does so from the inside. That’s because from the age of three years old, Cantorna’s father was an executive in the mission to save traditional families everywhere.

“I acted in Adventures in Odyssey as a kid, I was home-schooled K-12, and I vowed myself to the ‘True Love Waits’ campaign by putting a purity ring on my finger at the age of 13,” she writes for HuffPost.

A typical evening around the dinner table in her childhood home was pretty standard for the “perfect” family.

“We never ate in shifts, we ate as a family,” Cantorna remembered. “My mom was an excellent homemaker and always had dinner on the table when my dad walked through the door from work. We’d pray over our food before we ate it, and then sit around the table and talk about our day while we ate. After we were through, there was usually a devotional of some kind that my dad read, which included a Bible passage and some reflective thoughts. It was also not uncommon for us to memorize a passage—or even an entire chapter—of Scripture as a family and we’d practice it together at either breakfast or dinner time as well. Friday nights were our ‘family night.’ We always looked forward to it because that was the night we got to eat pizza and have dinner in front of the TV. We’d choose a family-friendly movie, which to my mom meant no cussing, no sex, limited violence, and a good moral message. Often, we’d have homemade ice cream or frozen yogurt for dessert.”

Focus on the Family claims to “save and strengthen families” and Cantorna agrees—if you’re referring to one specific type of family module.

“Focus on the Family claims to ‘save and strengthen families,’ but really, they only focus on one type of family—a family with one mom and one dad who are married and have born children together,” she said. “But there are so many other types of families—families that, by choice or by circumstance, do not fit the cultural norm or cookie-cutter shape of that family. There are families with one male and one female parent, but there are also families with two male or two female parents.”

She added, “There are those with adopted children or foster children, those with biological children, those with single moms or single dads, those with blended families, those with no kids—each one brings a unique richness and depth to the beautiful, diverse family of God. If we are going to focus on strengthening families, we need to focus on strengthening all families and not favor some while pushing others to the margins. The fact is that we all want to love and grow our families to the best of our ability and we all deserve the same rights and support.”

The ultrareligious group also claims to save marriages.

“Again, I believe if you are going to help save marriages, then you need to help save all marriages,” she said. “Focus on the Family may be known for helping ‘save marriages,’ but they have also destroyed a lot of marriages by convincing someone who is gay that they only choice they have is to still marry an opposite sex partner. Doing that has not only done deep psychological damage to the LGBTQ person by persuading them they are innately flawed, but it has also been incredibly insensitive and unfair to the person that that LGBTQ person marries.”

“Because of this theology, so many LGBTQ people have been deeply wounded and traumatized by the church to the point that many of them walk away from God completely,” Cantorna said. “Those that do keep their faith have had to work extremely hard and often undergo extensive therapy to be able to heal from that kind of spiritual trauma. The damage being done is life-threatening, which is why I feel it is imperative that we rethink these topics and how we address them, especially in faith communities.”

Cantorna is openly gay and married to a woman named Clara. The decision to embrace her own truth almost cost her everything.

“Coming out to my family was by far the hardest thing I have ever had to do,” she remembered. “The fear and anxiety that led up to that day was overwhelming at best and completely crippling at its worst. But once I was able to reconcile my own faith with my sexuality, I knew I was going to have to be honest about it with my family.”

She remembered, “Deep down, I knew that it could potentially cost me everything. I wasn’t prepared for the fact that it actually would. Telling my parents I was gay was to them, the equivalent of dying. In fact, when I came out to them, they literally got up and walked out of my house without any conversation around it whatsoever. We didn’t speak again for three weeks, and when we did, the conversation was brutal. The first thing they said to me was, ‘We feel like you’ve died.’ They went on to compare me to murderers and pedophiles, told me I was selfish for doing this to the family and putting my dad’s job in jeopardy, and took away my keys to their house.”

It only got worse over time. Harmful words and passive aggressive behavior continued to slowly shun Cantorna from her family to the point that she no longer felt safe around them. “We tried to maintain some degree of contact for the first couple of years, but it was emotionally exhausting and caused deep inner turmoil. My family became the place where I felt like I least belonged instead of where I most belonged. They kept hoping and praying I would change, but as I fell in love with Clara and we dated and became engaged, that hope for them waned. I had no family present on the day of my wedding and shortly after we got married, they cut ties with me completely. We haven’t spoken since.”

As for Clara, “My life finally started the day we met…This June we will celebrate four years of marriage and that time has gone so fast! Being with my wife Clara has brought my heart alive in a way I only dreamed was possible. For so long, so much of my life felt bleak and dark, but finally coming into my identity and coming out was like being set free after living in a cage my entire life. I’ve never felt more alive, more at peace, or more at home in my own skin. Yes, our marriage takes work and commitment just like any marriage, but my heart feels at home and like it is finally where it belongs. I am by far the happiest I have ever been in my life.”

Cantorna’s close friends also abruptly exited her life after she told them the truth about her heart and her life.

“Unfortunately, almost all of my extended family along with the majority of my friends turned their back on me as well,” she recalled. “I grew up in such a cocooned and sheltered world that most of the people I knew thought and believed exactly what my parents did: that being gay was an abomination, that I had given into temptation and was deceived by the devil, and that it was going to send my soul to hell. For many of them, I believe they feared that simply by associating with me—someone they believed to be involved in the darkest kind of sin—put their soul in jeopardy of hell as well. At the very least it made them uncomfortable. So many people, rather than facing something difficult or confronting their fear, felt it was easier to simply not engage at all. As a result, I ended up feeling completely isolated and alone.”

Now that time has passed, a few friends have circled back around to Cantorna.

“In recent years, there have been a few people from my past that I have been able to reconnect with and that has meant more to me than anything it the world,” she said. “I cherish those people, even though they are few, and find such life and healing in those friendships.”

Cantorna’s overall message in her memoir “Refocusing My Family” is clear: “It is fully possible to be LGBTQ and still have a healthy, thriving relationship with God. They are not mutually exclusive and I believe God embraces us—LGBTQ people—and blesses our committed same-sex marriages just as much as he embraces and blesses any straight person or marriage.”

Initially, Cantorna’s story was published in a blog post that she says was “a kind of test run and overnight it went viral. Since then, I’ve gotten an overwhelming number of messages and emails from people from all over the world with similar backgrounds and stories.”

In part because of the immediate emotional response to her life’s story out in the open and the response from likeminded individuals, Cantorna is taking it on the road.

“The unfortunate thing is that this is not just my story,” she said. “There are thousands of other people whose dads may not work at Focus on the Family, but instead is a pastor or missionary or ministry leader and they’ve grown up—or raised their kids—on James Dobson’s parenting principles, they’ve listened to Adventures in Odyssey, they’ve been homeschooled or immersed in the purity culture. There are so many themes that those from an evangelical Christian background have in common.

“And unfortunately, those who are coming out as LGBTQ within those communities are living many of the same horrors I did: feelings of unworthiness and self-hatred, deep depression, self-injury, shame, suicidal thoughts or ideations. This story is far more prevalent than I wish was ever possible. So “Refocusing My Family” was written to A) give a beacon of hope to the LGBTQ person who grew up in a conservative faith community and is struggling to come out, and B) to create conversations for change among parents, families and friends of LGBTQ people of faith so that we can become more loving and inclusive, rather than shame them out of fear.”

She concluded, “I hope that by reading my story, people will realize that the theology that says being gay is a sin isn’t just a hot political topic or a good news story—this is affecting real people with real lives. And it is causing people to actually take their lives. We need to do better. And I believe that by humanizing the issue and making it a story that many of people can relate to, that lives will be changed and families will be restored because they are able to look at it through a lens of love and understanding, rather than judgment and fear.”

Cantorna’s story is in her new memoir, “Refocusing My Family: Coming Out, Being Cast Out, and Discovering the True Love of God.” Available now (almost!) everywhere books are sold.

Amber Cantorna is the author of “Refocusing My Family: Coming Out, Being Cast Out, and Discovering the True Love of God” and the founder of Beyond, a non-profit organization offering support to LGBTQ people through their coming out process. People can see Cantorna at one of her 20+ tour events nation-wide by checking out her tour schedule, and follow her on Facebook and Twitter @AmberNCantorna.