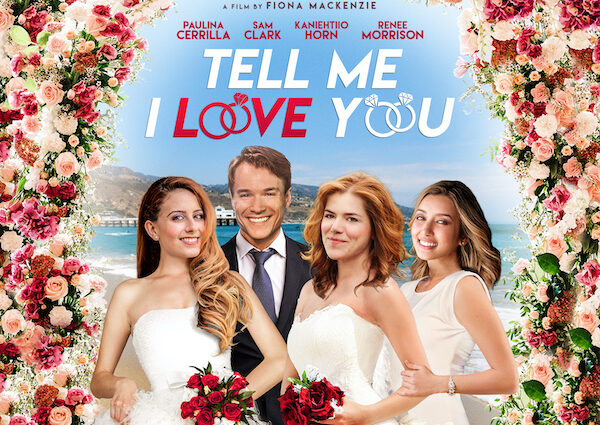 Modern romantic comedy Tell Me I Love You tells the story of three Malibu best friends, roommates and bandmates discovering their dreams and finding love with a crazy plot to make some cash on the way. The film is set to release on VOD and DVD June 2, 2020 with special virtual screening event Q&As, courtesy of Vision Films.

Tell Me I Love You is a sexy, romantic comedy revolving around three young bandmates – straight, gay and fluid – living together as a musical tribe in a borrowed beach house in Malibu. As they work tirelessly to record their first album and catch a break in the cutthroat music industry, something very unexpected happens…life altering true love. Who commits to whom is the ultimate question.

An Ascent Media and Chelsea Pictures production, “Tell Me I Love You” was produced by Fiona Mackenzie and Bill Chamberlain, with cinematography by Carmen Cabana (High Fidelity/ Hulu) and Yash Bhatt. Editing by Tim Silano (Home Alone 2, Mrs. Doubtfire) and original music by Sascha Blank.

“I’m thrilled that Tell Me I Love You is being released this summer through Vision Films,” said Mackenzie. “The story is a modern, coming-of-age romance set in the music industry in Los Angeles. During these extraordinary and challenging times, it was especially meaningful to be able to make a film about things that bring us all great happiness – family, love and lifelong friendship.”

“Tell Me I Love You is an inspiring film about friendship and following your dreams with perfect doses of romance and comedy and great music. We are excited to bring this very modern love story to audiences across North America,” commented Managing Director and CEO of Vision Films Lise Romanoff.

Mackenzie, a prolific writer, director, and producer, is a former television journalist for CNN, ABC and CBS. She currently has a variety of  projects in development at with Paramount, Netflix, PBS, and Sony Pictures, including her multi-cultural LGBT thriller Beautiful Lover, which was a finalist in the Outfest Screenwriting Lab, and is now being developed as a television series.

Prior to becoming an independent filmmaker, Mackenzie was a development executive at Sony Pictures working on American History X (Oscar nominee) and held an in-house producing deal at 20th Century Fox (The Black List, I-Robot).

Mackenzie’s scripts and projects are often based on strong female protagonists and the complex world of characters she interviewed as an investigative journalist.