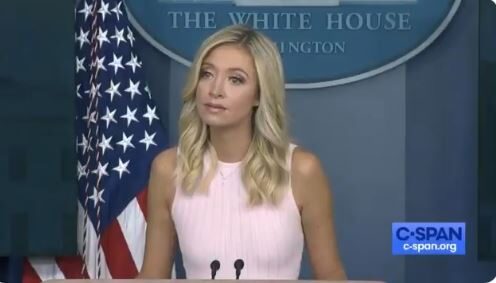 On July 13, 2020 during the White House press briefing, Press Secretary Kayleigh McEnany was asked about the recent letter Rep. Suzan DelBene sent to DOD and DOJ along with 116 members of Congress calling for an end to the ban on transgender service members. McEnany couldn’t come up with a justifiable reason for the ban and then falsely asserted the Trump administration has a good record on LGBTQ policies.

Below is a transcript of the interaction and here is a clip.

Reporter: We’re coming up on the three-year anniversary of the President tweeting he’d ban transgender people from the military “in any capacity,” which led to the policy currently in place. Last week, a group of 116 lawmakers led by Congresswoman DelBene wrote the administration, urging them to lift the policy. Would the president reconsider the policy?

McEnany: I haven’t talked to him about that specific policy, but this president is proud that in 2019 we launched a global initiative to end the criminalization of homosexuality throughout the world, he has a great record, when it comes to the LGBT community, The Trump administration eased a ban on blood donations from gay and bisexual men and he launched a plan to end the AIDS epidemic by 2030, so very proud of our achievements.

McEnany: I have no updates for you, but several of the events that you cited, like the Supreme Court ruling, I would refer you back to Justice Kavanaugh, who said, “We are judges, we’re not members of Congress. Instead of a hard earned victory won through the Democratic process, today’s victory is brought about judicial dictates.” So we’ll always stand on the side of correct statutory interpretation.

Rep. DelBene had the following response to McEnany:

“Why doesn’t the White House have a justifiable reason to continue the ban on transgender service members? Because it’s an indefensible policy. The Supreme Court recently affirmed that workplace discrimination based on gender identity and sexual orientation is unconstitutional. This should apply to military service as well. Thousands of transgender service members have already served their country with pride and distinction. This ban should be eliminated immediately.”