WNBA to honor all players with community award for social justice 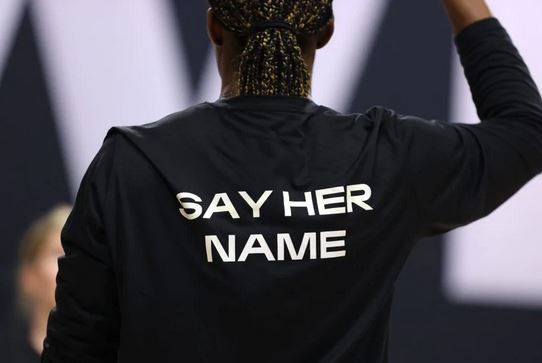 As part of the dedication of the 2020 WNBA season to social justice, the league and State Farm have named all WNBA players as the recipients of the 2020 season-long WNBA Community Assist Award presented by State Farm for their continued commitment, leadership and collaborative efforts to promote racial equality and systemic change.

The WNBA Cares Community Assist Award presented by State Farm, which was previously awarded to one player each month of the season, traditionally recognizes an individual who best reflects the WNBA’s passion for making a difference in the community. This year, the WNBA and State Farm present the season-long award to all players in recognition of their collective passion and dedication to social justice.

“Through the years and especially this season, WNBA players have worked together tirelessly to combat social injustice and racial inequality, and this award is a testament to each and every player’s dedication to advocating for change,” said Head of WNBA League Operations Bethany Donaphin. “WNBA players have used their platforms and voices to inspire real action, and our support for them is unwavering.”

With WNBA players leading the way, the WNBA and the Women’s National Basketball Players Association (WNBPA) created a bold new platform, The WNBA Justice Movement, to amplify the voices and leadership of WNBA players in the social justice space. With the creation of this platform and the launch of the WNBA/WNBPA Social Justice Council, WNBA players have worked to bring awareness to and fight against systemic racism.

In partnership with the African American Policy Forum (AAPF), which created the #SayHerName campaign in 2014, WNBA players have shed light on the policy issues contributing to police brutality and racial violence and connected with the families of female victims to elevate their stories. WNBA players continue to “Say Her Name” throughout the season as they aim to be a voice for the voiceless.

“We are proud of the WNBA players who use their voices to create positive change in the world and challenge all of us to be good neighbors to everyone,” said Kristyn Cook, Senior Vice President, Agency and Marketing, State Farm.

The WNBA and State Farm will donate $50,000 to the AAPF in recognition of the WNBA players’ commitment to The WNBA Justice Movement and to the #SayHerName campaign.

“Thank you to State Farm for this incredible donation and thank you to the players of the WNBA for uplifting and empowering the work of the African American Policy Forum — to say this is a dream come true is an understatement,” said Professor Kimberlé Crenshaw, Co-Founder and Executive Director of the AAPF.

Crenshaw added, “With this award we’ll be better able to help raise awareness of the often invisible names and stories of Black women who have been killed by police. It will help us provide support for their families, and advocate for policies, responses, and solutions that pay respect to their lost lives. We are, truly, beyond grateful for the support from the WNBA, its players and State Farm.”

“I knew coming into this season that I only wanted to play if I was going to be vocal about systemic racism. With the creation of the WNBA/WNBPA Social Justice Council, the players in this league have been able to do that and more,” said Chicago Sky guard and Social Justice Council member Sydney Colson.

Colson added, “I am constantly trying to align my actions with my purpose and choosing to play made me cross paths with Kimberlé Crenshaw, cofounder of the AAPF. Although the circumstances for this partnership were sad ones, I’m grateful for the fire that this introduction to activism has lit inside of me.”

Throughout the 2020 season, in addition to having “Black Lives Matter” featured prominently on the floor, Breonna Taylor’s name on the uniforms, and “Say Her Name” on warmup shirts, WNBA players have worked with AAPF to have on-court moments of recognition to raise awareness of the female victims of police brutality — women like Michelle Cusseaux, Kayla Moore, Tanisha Anderson, and many others.

Through the leadership of the Social Justice Council, the players have called for action to address the policy issues highlighted by AAPF, convened activists, organizers, and elected officials in powerful forums, and promoted community education on the census and voting rights.

Please visit wnba.com/statefarmcommunityassist/ for more information on the award and its recipients.