Rachel Maddow Deep Dive: ‘Her Upbringing Made Her Want to Jab the Stick in the Eye’: Biographer 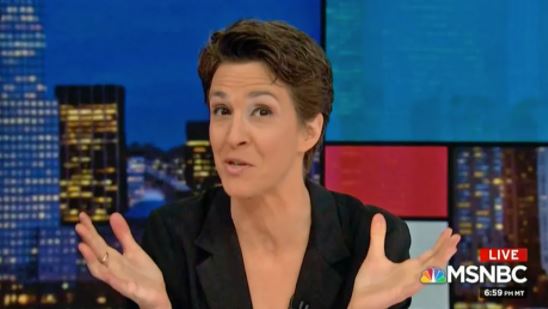 There’s an intensely innate wisdom packed inside 47-year-old openly-gay journalist and political commentator Rachel Anne Maddow that seems to make her increasingly valuable over time. This rebel-rousing butch icon of female empowerment is anything but a free radical; she’s the glue of a society right now flailing apart at the seams – and she’s unapologetic. The thing is: she gets to be. She has science, history, policy, and actual facts to back up her nightly rendering of current events on MSNBC’s The Rachel Maddow Show – qualities that are now being seen and fully appreciated as a rebirth post-four years of absolute hell in a political handbasket.

“Maddow’s first stab at popularity was when she was doing the radio shows in Western Massachusetts. When you’re in a little teeny market like that you really need to get out there and promote your show and publicize yourself,” Rogak explained, citing that Rachel would “do the remotes and the pet store openings and things like that.”

Maddow graduated from Stanford University in 1994 and the University of Oxford in 2001. At the time, she wasn’t “Rachel Maddow” per se – she was a young woman with a full career on the horizon hoping to carve out a name for herself one interview and news story at a time. The way she talks to her viewers every night now is extremely reminiscent of how she used to deliver her presentations while in college.

“It’s not terribly difficult to see the seeds that were planted 30 years earlier when she was unknown,” Rogak said. “And then see them as they bloomed every night on her show. She wants to get the message out, she wants to get the information out. She’s like the nerdy very brainy college professor standing in front of a board every night trying to shake her students awake to get what she believes in into her students’ heads.”

Maddow was raised in a conservative neighborhood and her experiences as a young gay woman colored her every move. Just call her “Rebellious Rachel.”

“I think that her upbringing made her want to jab the stick in the eye,” Rogak said. “Because she was surrounded by it and she did speak out here and there.”

Rogak referenced this YouTube graduation video wherein a formidable Maddow took the podium to deliver an approved speech only to flip it on its head entirely when she had the microphone.

“She submitted a draft and then she totally threw it out,” Rogak said. Instead of her speech being a vanilla “we are the future” type, Maddow “totally gave a different speech… She didn’t rebel outwardly much until that speech. And then it was like the barn doors were blown off.”

Maddow embarked on her journey at conservative Stanford next and outed herself in a rather fascinating matter.

“She basically printed out ‘I’m gay’ and stuck it on the inside of the stalls of the bathrooms in her dorm,” Rogak said. “And then she agreed to be interviewed by the university newspaper in which she and another student came out.”

The editor told Maddow the date the article would be published and, since she still hadn’t come out to her parents yet, she thought she had some time. That didn’t happen.

“What happened was that they ended up publishing the article early before she had told her parents and her parents were just extremely hurt and distraught and their relationship wasn’t great for a good number of years,” Rogak said.

Maddow has long suffered from depression, something Rogak explored next.

“You know, she’s a mega celebrity and her on-camera persona is just that – a persona,” Rogak shared. “It’s not who she is behind the scenes. It’s part of who she is, but it’s a small part. She’s had this great satisfying personal home life that just kind of mellowed her out a little bit and has made her more protective of what she keeps hidden from the rest of the world.”

Maddow has suffered from depression since her teenage years and has only begun to recently speak on the topic in a personal sense.

“She’s unusual in that she has said publicly that therapy hasn’t worked for her and she’s been a little reticent to say exactly what has helped maybe to avoid the situation where, again, one of your readers will read this and say, ‘Oh, it worked for Rachel, maybe it’ll work for me,’” Rogak said. “And I really respect her for refraining from doing that. You know, maybe again, that’s part of her wanting to hold on to her privacy, but also maybe again, not wanting to give anybody who is also experiencing suffering from depression any false hope.”

Rogak added, “The fact that she has suffered from depression has not been surprising, given how she grew up, her environment, how she had to hide. Sometimes when somebody is so outward as she is, I don’t want to say overly energetic, but coming back to the jabbing a stick metaphor in, you know, that’s compensating for something.”

It could also be a coping mechanism to get through “a day in the life,” so to speak. In her book, Rogak chronicles a “normal” day on the set of Maddow’s uber popular talk show wherein there’s “a hive of activity, including a hundred employees and staffers trying to get a show together. And Rachel regularly spends a good three, four or maybe more hours each day hibernating in her office, just trying to write that A Block monologue because that’s how she works best. And she’s a bit of a perfectionist. There’ve been stories about how she’s edited and revised that intro up to the very last possible second.”

Rogak recalled stories of when “there have been five seconds to spare and Rachel is literally running to her chair while putting her blazer on and there’s only time for a couple swipes of a makeup brush on her. I believe she’s a perfectionist. And in that case, she will never get it perfect, but she needs to be by herself. She’s very solitary and she needs to be by herself in order to achieve that level of perfection. It very much ties in with the depression because if you’ve been close with anybody who’s been depressed, they compensate for it in different ways when they have to apply… when they have to hide it. When you have to cover it up.”

Covering it up may be more in the past now than even one year ago before COVID-19. Maddow recently opened up live on the air about her partner Susan Mikula’s battle with the novel coronavirus and the fear, sadness, hopelessness, anger, and debilitating lasting effects that came along with the diagnosis for everyone around her. It was a deeply personal call to action for her millions of fans and thousands of newscaster colleagues to buckle up, get tested, vaccinated, and step into the fight for a safer future. It was also part of a revealing love story that had before then gone untold.

“What you need to know is that, whoever is the most important person in your life, whoever you most love and most care for and most cherish in this world, that’s the person who you may lose,” Maddow said. “Or who you may spend weeks up all night freaking out about, and calling doctors all over the place, over and over again all night long, trying to figure out how to keep that person breathing and out of the hospital.”

Maddow and Mikula met in 1999 while Maddow was working on her doctoral dissertation. Mikula, an artist and photographer, and Maddow regularly split their time between Manhattan and Massachusetts.

As for what comes next for Maddow, she’ll tell us. When it’s her time.

2021-01-25
Previous Post: Explore the PNW with Your Quaranteam This Spring
Next Post: New MAP Report: Why We All Need the Equality Act Now